We made a proposal “#Hashtag” together with Tuomas Klaus from Architects Sankari for a new ecological and innovative housing area in Vartiosaari, Helsinki. The competition’s aim was to find ecological, innovative and cost-effective solutions for a new housing area in Helsinki. The competition site is in a small island in Helsinki which resulted for us searching for something with a unique character for the area. Bird’s eye view of the area

Drone view of the area

We drew inspiration from traditional Finnish wooden urban blocks with their pleasant human scale but relatively high build density. We also used a lot of elements familiar from traditional urban landscapes such as the vista tower as a point of orientation to show that they could give a nice flavor to a modern housing area. Since the area was to be designed nearly car-free we could apply narrower street widths than in most urban developments in Helsinki nowadays. This resulted on a pleasant scale in the alleys and allows the area to become a true walkable neighborhood.

Cross-section of the area

View from the main square towards the vista tower 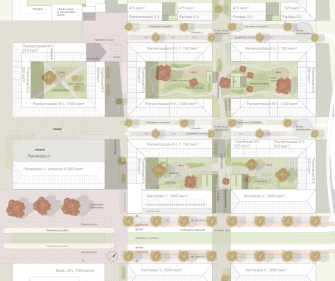 View from a garden alley

Our proposal ended up in the highest class in the competition right after the awarded proposals (5th to 9th out of 29 proposals). The proposal was praised for it’s elaborate design of the street level functions and ecological concept.