I noticed right at the beginning of the residency month that using only the subway and walking was going to kill my feet. We thought cycling is an answer for that. I have previously done sightseeing in many cities from Kyoto to Berlin by bike and found it a nice way to get to know the city. Biking in a much larger city like New York made me a bit nervous in the beginning, even though I knew that numerous procedures done in recent years makes it easier and safer to bike in NYC nowadays.

How did NYC become (more) bike-friendly

The change into a bike-friendly environment happened thanks to Janette Sadik-Khan, a former Transportation commissioner of New York City. As she tells herself, in just two years after she started in the job, they had created a 200-mile bike lane network in NYC, doubling the existing 220 miles of bike lanes. I didn’t happen without resistance. One of the hottest arguments was about bringing a bike lane to Prospect Park West. Park Slope next to Prospect Park happens to be a nice and expensive neighbourhood. Prospect Park West on the other hand didn’t seem heavily trafficked at all when we went there one Friday afternoon, one of the busiest rush hours of the week. Clearly the bike lane has not been the disaster opponents were expecting, even though a former 3-lane street was transformed to a 2-laner. Actually quite the opposite has happened, since the number of accidents has decreased and traffic flow has improved, as Jeff Speck tells in his book Walkable City. 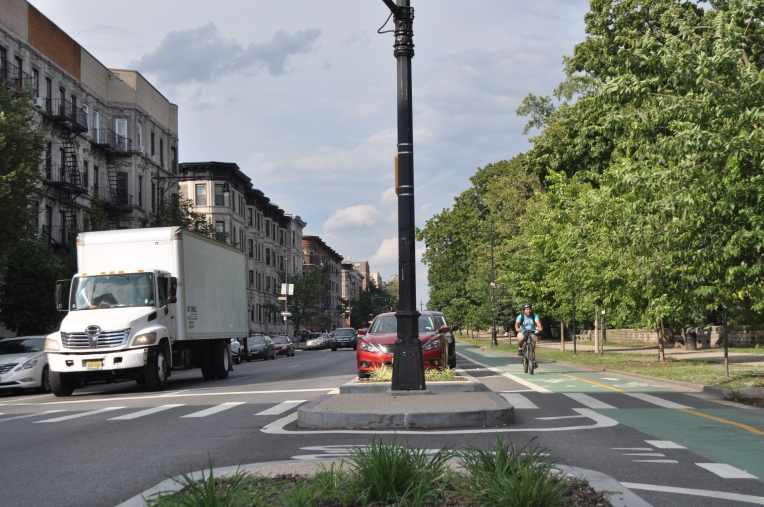 In 2008, the vehicle lanes of one of the most prominent and central streets of NYC, Broadway, were narrowed down to make room for a bike lane. Simultaneously, a series of plazas were created in the corners where diagonal Broadway meets avenues from Times Square to Union Square. In some of these plazas all motored vehicle traffic is forbidden.

In action it seemed that the bike lanes and plazas slowed the motored traffic down a bit, but at the same time speeded up cycling tremendously. The sense of safety, which I very much appreciate, was better than in most streets of Helsinki. Plazas were cozy and popular places to sit down, even though they looked temporary (on purpose). It was actually hard to imagine Broadway how it must have looked like before the change.

Plaza and a Citi Bike station along Broadway.

Subway stations are usually about ten streets or roughly one kilometer apart, and they run effectively only towards downtown both in Manhattan and Brooklyn. Luckily New York City has a Citi Bike system since 2013 and we decided to give it a try. 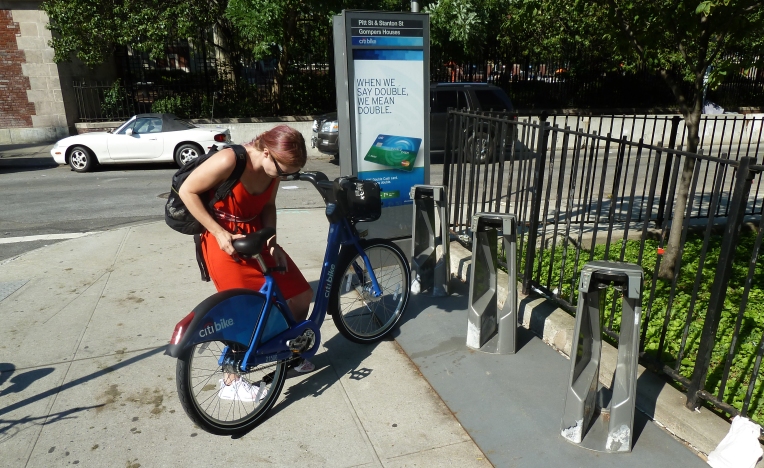 Citi Bike was super easy to use and we found it affordable. You can choose between a 1-day pass, a 3-day pass or a yearly membership. You find the whole station map on their website. As usually in shared bike systems, you have to return the bike within a half an hour, but you can take as many rides as you want to. Citi Bikes are apparently popular in work commuting. During rush hour and near big workplaces Citi Bike stations were sometimes empty, but otherwise there was always a bike to rent.

We explored the city by bike several times. The combination of subway and Citi Bike worked seamlessly together and we didn’t have to walk in the heat any more than necessary. Manhattan traffic culture was quite forgiving towards cyclists and car traffic was so slow that fears quickly disappeared. It felt different to cycle in less central areas of Brooklyn, where driver is still clearly the king.

All in all, New York City has succeeded making cycling a real, approachable option in commuting and moving in the city. This has happened in just a few years, and the walking environment has improved a lot at the same time. We have a bike boom in Finland as well, so let’s keep it growing! If change  is possible in NYC, it is possible anywhere!