We got the opportunity to visit the National Association of City Transportation Officials’ (NACTO) headquarters here in NYC last week and meet two members of their Global Designing Cities Initiative program.  NACTO is a non-profit coalition between 42 US  and 4 international cities (Canada and Mexico) that promotes cities’ interest in federal decision making regarding transportation and works as a knowledge sharing network. As mentioned before as a part of the knowledge sharing they’ve made an impressive set of street design manuals with distinctive, comprehensible and high-class visuals.

image 1: Example of the appealing visuals of Transit Street Design Guide by NACTO

I first came across with NACTO’s guidebooks when I was working in WSP Finland on a project to set principles for designing Espoo’s city centers to more urban areas. Going deeper into the ingredients of urbanity, walkability stood out as one of the main components of urban neighborhoods. Most of the (sub)urban centers in Finland are missing a public environment and streets that encourage to walk. Looking through Finnish cities’ street dimensioning manuals I noticed that most of them could be improved with a more complete spatial vision of streetscapes (image 2 shows a typical representation of street type). This is why I started to look for examples from abroad.

image 2: A typical Finnish depiction of a street type.

As it turns out, we are not of course alone with our pursue for walkability and automobile-centric practices in designing streets are still a norm also here in the US. As Jeff Speck puts it in his book Walkable City “What characterizes the discussion on cities these days is not a wrongheadedness or a lack of awareness about what needs to be done, but rather a complete disconnect between that awareness and the actions of those responsible for the physical form of our communities”. Like in Finland, also in the US urban street design is often hampered by instructions made for either suburban or highway conditions that lack the understanding of streetscapes as important public spaces. That’s the reason why e.g. NYC Department of Traffic lead by commissioner Janette Sadik-Khan worked with NACTO on street designs more appropriate for city needs.

Seeing NACTO’s Urban Street Design Guide is like a breath of fresh air among street manuals. It is immediately comprehensible and it has great visuals to support the ideas. Already in the beginning of the book the street design principles set the tone for human-centric and versatile approach (see the principles below in picture 3).

Taking things to the global level

We were super lucky to get an appointment now in August since it was a hectic time in NACTO’s office: they are just about to publish a new book called Global Street Design Guide. A guidebook that tries to address street design issues on a global level might feel a bit of an exaggeration at first, but when it comes to walkability and streets as public space, things are truly global. After all, doing pedestrian-friendly environment is about human dimensions which are universal. And as we got to see some sections from the upcoming book, human-centered design is indeed the focal point of the book as seen in the great visual seen in image 5. Helsinki has also made a similar prioritization in its traffic development plan but yet again NACTO does the same accompanied with great complementing imagery. 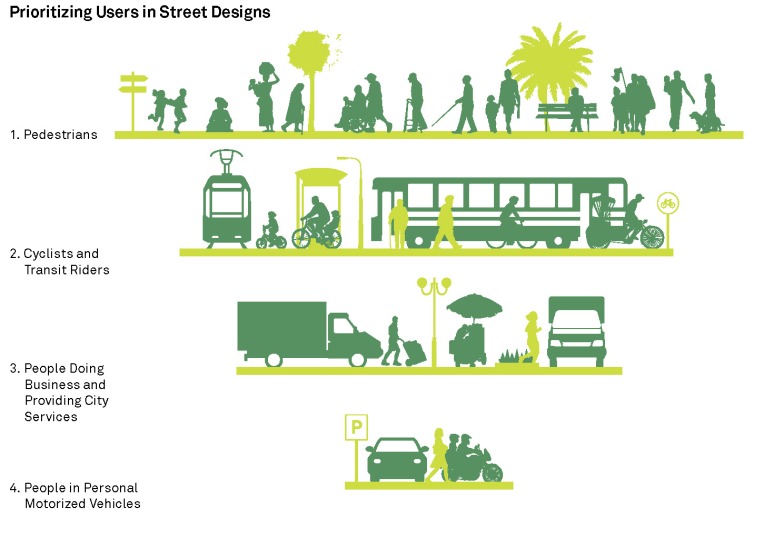 Another important and ambitious point in the global guide is to build a worldwide peer-to-peer network and to collect a good set of best practices from around the globe. (E.g. Helsinki has also contributed some examples to the upcoming manual.) Typically in Finland one might look at a street design recommendation and think “how does this work with snow”. The idea in the global guide is to show more general principles on comfortable, safe and delightful street designs in the manual and have the global network of cities as an extra support for more detailed solutions. The global network has also provided realized examples of different street solutions which is a great addition to the visual representations.

It is also interesting to notice in this kind of peer-to-peer meetings that although the contexts may vary, a lot of the current topics are the same. For example we all shared the notion that different professions in planning tend have different approaches and this kind of proactive street design guidelines should be made as a multidisciplinary joint effort. I think this is why it is important to share the experiences and knowledge instead of competing professionally and NACTO is doing a great job in that!

Two happy urban designers after a great visit to NACTO.

PS. On our way to the meeting we got a good example of the versatile transport options in NYC. As we were heading to the meeting office the subway train suddenly stopped about 15 streets away from NACTO’s headquarters. We first tried to walk (a little bit of runnig occured as well 🙂 ) but we soon noticed a Citibike-station nearby. Luckily it is quite quick to purchase a day-pass to the system! Thanks to this unusual travel-chain we were able to make it to the meeting on time.